My aunt, sister and I first agreed on doing a getaway. When it came down to the destination, my sister voted for South Korea over Greece.

I blame it on the influence of the Hallyu wave.

I was slightly disappointed since I had already visited Korea a couple of years back and Greece could have been my first trip to Europe. Nonetheless, I wasn’t going to let it dampen my vacation mood.

We were going to spend 10 days in Korea and decided to allocate a good 3 days to Jeju. Over the years, Jeju has accumulated a fair amount of popularity among tourists and we couldn’t possibly miss out, right?

We touched down at Incheon international airport, Seoul. To reach Jeju, we had to lug our baggage onto the trains to Gimpo international airport for their regular flights southwards to the island. It was actually very much of a hassle in hindsight; taking a plane to Shanghai Pudong Airport for transit to Jeju (in the same airport) might be a more convenient option.

If you’re also traveling from Seoul: FYI – multiple airlines ply the Seoul-Jeju route and it costs about SGD80 one way, with flights scheduled almost hourly or more. Once we landed in Jeju, we took a cab to our hotel – Four Seasons. While it wasn’t that acclaimed Four Seasons chain, it was a decent lodging. The hotel works really well on a modest budget, working out to less than SGD25 per person per night. Personally, I consider that to be a major win when it came to budgeting for the trip.

Jeju island is huge – almost 2.5 times the size of Singapore. There is hardly any public transport, making it difficult for tourists with no cars to navigate.

We decided to engage a driver for our second and third day on the island. For the first day, we bought the one-day pass for the Jeju city bus. It has another moniker – the hop on hop off bus so you might see sites using different names or use the names interchangeably. With the one-day pass (about SGD13 per person), you can hop off and hop back on the bus at any of its designated stops without paying an additional cost. The bus plies many places but the downside is that there’s only one bus every hour.

Unfortunately for us, we only had time for one stop and we decided on Dongmun market.

Don’t be like us though; start early at 9 AM in the morning to make full use of the pass!

You can get more information about the bus route, ticketing and schedule here: http://www.jejugoldenbus.com/en/course/

To save time and money, pre-purchase the ticket from Klook:

(Note: this is an affiliate link and I will earn a commission if you click through and make a purchase. There is no additional cost to you. ) The market is huge.

But I was kinda disappointed.

Korean variety shows tend to, in a way, romanticize their markets so I formed a certain, unrealistic expectation. It was definitely not off-putting but I was just slightly let down by the normalcy of the market. Immediately as you enter, you will notice many stalls selling hallabong oranges; the amount of which led me to wonder if there’s really that much a demand for the oranges.

The oranges are specialty products of Jeju and are named after Hallasan, the main source of production. You’ll also find plenty of souvenirs, such as chocolates, made with hallabong or infused with its flavour. When you’re there, I’ll highly recommend you indulge yourself in the local snacks. You’re unlikely to be getting housewares, fruits or fresh product anyway, so make your trip worthwhile with some treats. 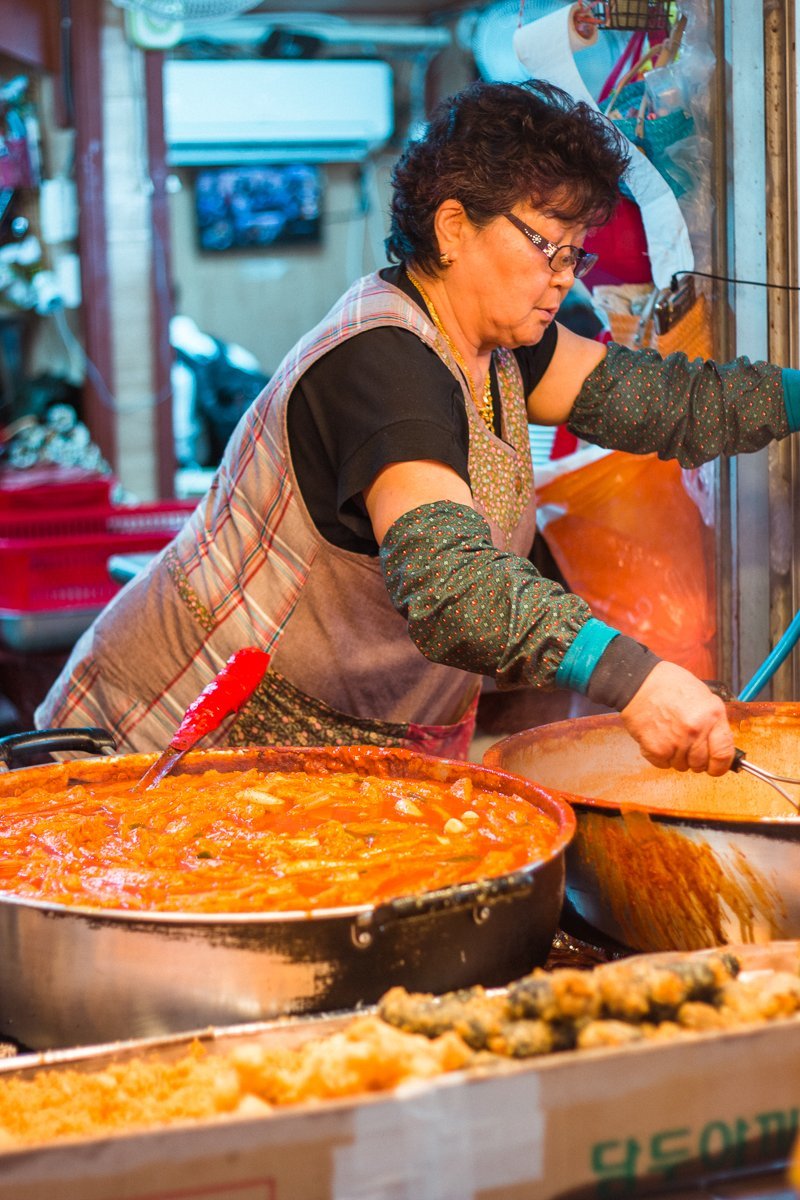 We tried the rice roll, hallabong juices but skipped the rice cakes. Nothing beats this unassuming snack though: It’s like a plain pancake topped with sugar syrup. Simple but absolutely addictive; do NOT miss it!

We took the last city bus back to our hotel. It wasn’t long before we felt peckish and our search brought us to this restaurant nearby. Regardless of the restaurant you visit, be sure to order Ginseng Chicken soup.

The soup is a specialty of Jeju and the chicken is often cooked till it’s really tender. The whole dish is simply comforting, especially during cold days. I heard that the locals like to eat this dish during summer though.

We turned in for the night shortly after dinner since shops in Jeju appear to close in the evening and there wasn’t much for us to do.

The subsequent days in Jeju got better as we explored more of the island. Check out our day two travelogue here!