I first came across Guo Pei’s designs in 2010 through her ‘1002th Arabian Night” collection. I remember just how awe-struck I was as the models strutted down the runway in her elaborate creations so you can imagine my delight when I found out that the Asian Civilisations Museum is exhibiting Guo Pei’s works right here in Singapore! Guo Pei is helmed as China’s first couturier and is known for works with strong oriental influences made with traditional techniques such as embroidery. The exhibition, “Chinese Art and Couture”, juxtaposes historical artifacts against Guo Pei’s updated designs, with her works taking centre stage. Each heirloom piece is characterised by Guo Pei’s signature craftsmanship with impeccable finishing, opulence, and attention to detail. Rihanna wore Guo Pei’s design to the Met Gala in 2015, making the world notice Guo Pei even though she had already been creating couture for more than 30 years. The very same majestic robe worn by Rihanna, in its rich, resplendent yellow, is now displayed in the main hall on the second level of the Asian Civilisations Museum, serving as a preamble for the main exhibit. The intricately-embroidered train is a sight to behold. The exhibition itself starts off with the more traditional pieces, such as the Kua worn by Angelababy, before moving to full-blown works of art and imagination. The pieces that work within the traditional boundaries are probably the more commercial pieces that rake in the revenue for her ‘Rose’ studio, which employs a team of 500. Though the creations follow traditional silhouettes more closely, the details are stunning. We then moved on to her couture creations, many of which were from her 2012 collection, “Legend of the Dragon”. Guo Pei spares no expense when it comes to details, imploring you to take a closer look from every angle. Trains are peppered with tons of Swarovski crystals and many of the pieces come with a description to inform the visitors the thousands of hours that went into their making. Each piece was an imaginative and daring take on historical fashion. Every piece was different and refreshing.

The highlight of the exhibition for me was definitely this piece: This regal piece was worn by the then-78-year-old Carmen Dell’Orefice in a 2009 show. The gown weighed 50 kg and the regal Dell’Orefice had to be supported by 2 men as she walked down the runway. I remember gasping when she stepped out onto the runway. The gown looks even more magnificent and ethereal in real life!

If you’re interested to see the gown in movement, the full show can be viewed in this Youtube video.

This has to be one of my favourite exhibitions in a long time and I highly recommend it! Though you can see Guo Pei’s works online, nothing beats admiring them in real life. The details will take your breath away.

The exhibition runs till 15 September 2019 at the Asian Civilisations Museum in Singapore so remember to mark it in your calendars lest you miss it! More details can be found on their website.

Some tips for your visit

1. Buy the tickets at the museum

The site lists the tickets at $12 per pax for Singaporeans and permanent residents but I got mine at only $6 over the counter. My sister got in for free with her student pass. So I’m not too sure exactly how much it’s the admission but it seems like it’s way cheaper just to get them when you’re there.

We went there with only our phones. Photos turned out blurry and noisy due to the dim lighting. 🙁

3. Allocate at least 1 to 2 hours for the exhibition

The scale of the exhibition is small but the details of Guo Pei’s works are mind-blowing. You’ll definitely need time to admire them all. Besides, there are other exhibits at the Asian Civilisations Museum which are very interesting as well! 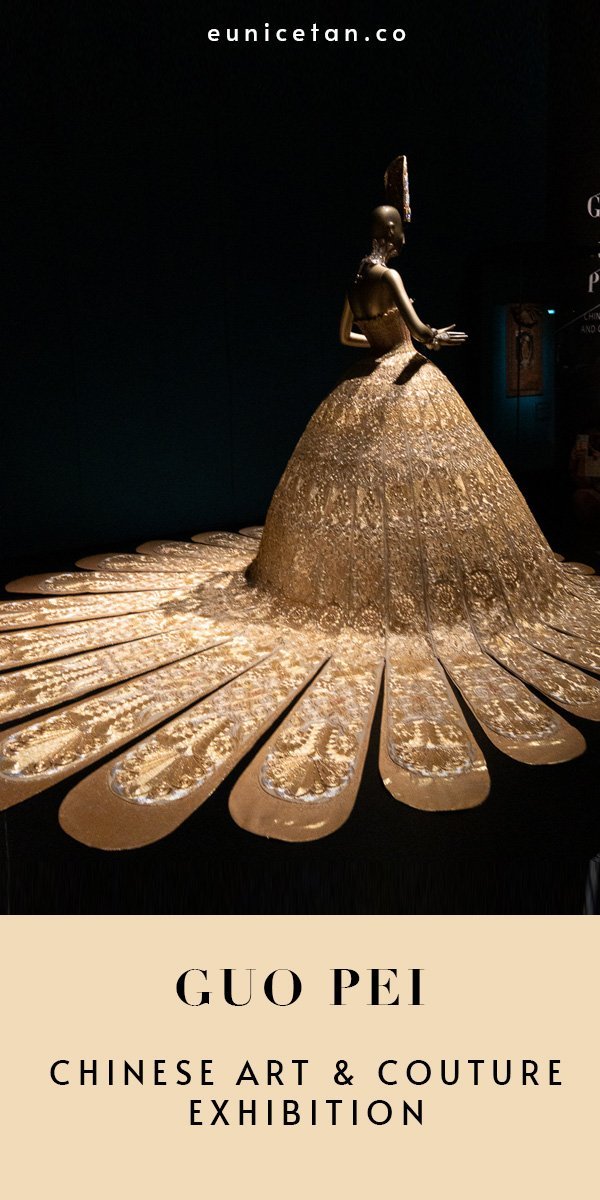 © Eunice Tan and eunicet1.sg-host.com, 2020. Unauthorized use and/or duplication of this material without express and written permission from this site’s author and/or owner is strictly prohibited. Excerpts and links may be used, provided that full and clear credit is given to Eunice Tan and eunicet1.sg-host.com with appropriate and specific direction to the original content.